What does a country’s gastronomy mean and what does it have to do with who we are? Well, it turns out quite a lot. It’s at the very heart of what it means to be Jamaican, according to Professor Dr. Barry Higman, in his tome “Jamaican Food”. The subject of food is diverse, layered, and complex. It is influenced by history, politics, and ethnicity.

Jamaican gastronomy is a part of our history and our cultural heritage. Our gastronomy is a unique blend of flavors, spices, ingredients, and recipes that have been carried to the islands by various waves of migration to Jamaica. It is the recipes, the method of food preparation, and the types of food that have been eaten, enjoyed, and adapted over centuries.

The era of colonization and slavery violently undid and remade the society of Jamaica, including it’s culinary practices. Enslaved Jamaicans developed many of our beloved foods out of extreme necessity, and applied the traditional methods of their homelands to new ingredients. Many of our dishes are made with the cheaper cuts of meat such as the extremities of an animal: the tail, foot, head or offal. These are generally slow-cooked stews or braises, with beans and spinners (finger-like dumplings) and served with rice and peas, or with various tubers, or roasted breadfruit. Salted fish or salted meat is also an integral part of Jamaica’s gastronomy. Salted fish was brought to the islands on the return voyage of the slave ships and banana boats because it could last the voyage. Many of our dishes also involve cooking with coconut milk. These rich stews made with vegetables, beans, or fish are called “Run Down” and come from the African method of cooking with coconut milk, where the coconut milk is reduced, or “oiled down” to a thick, custard-like consistency. 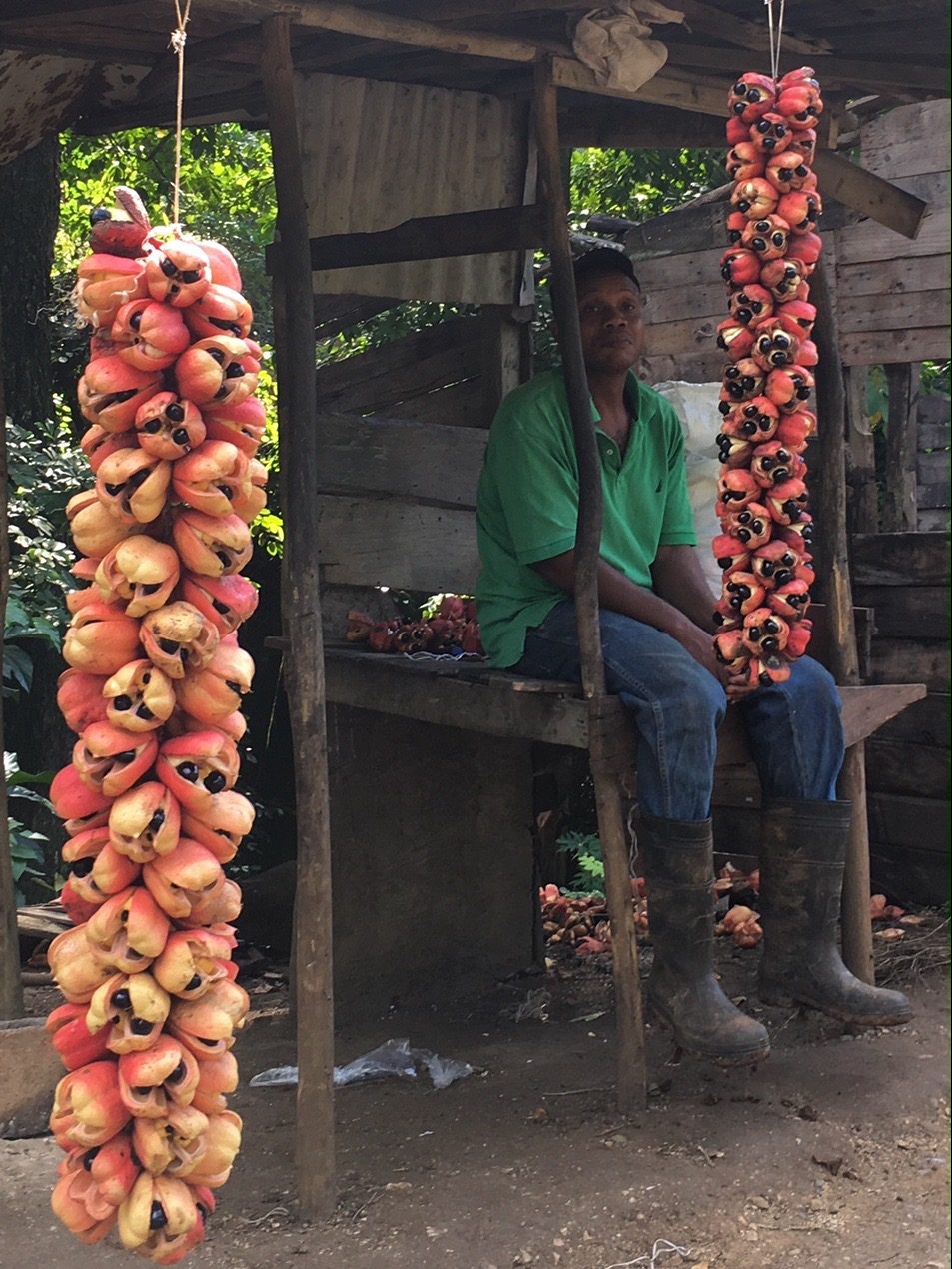 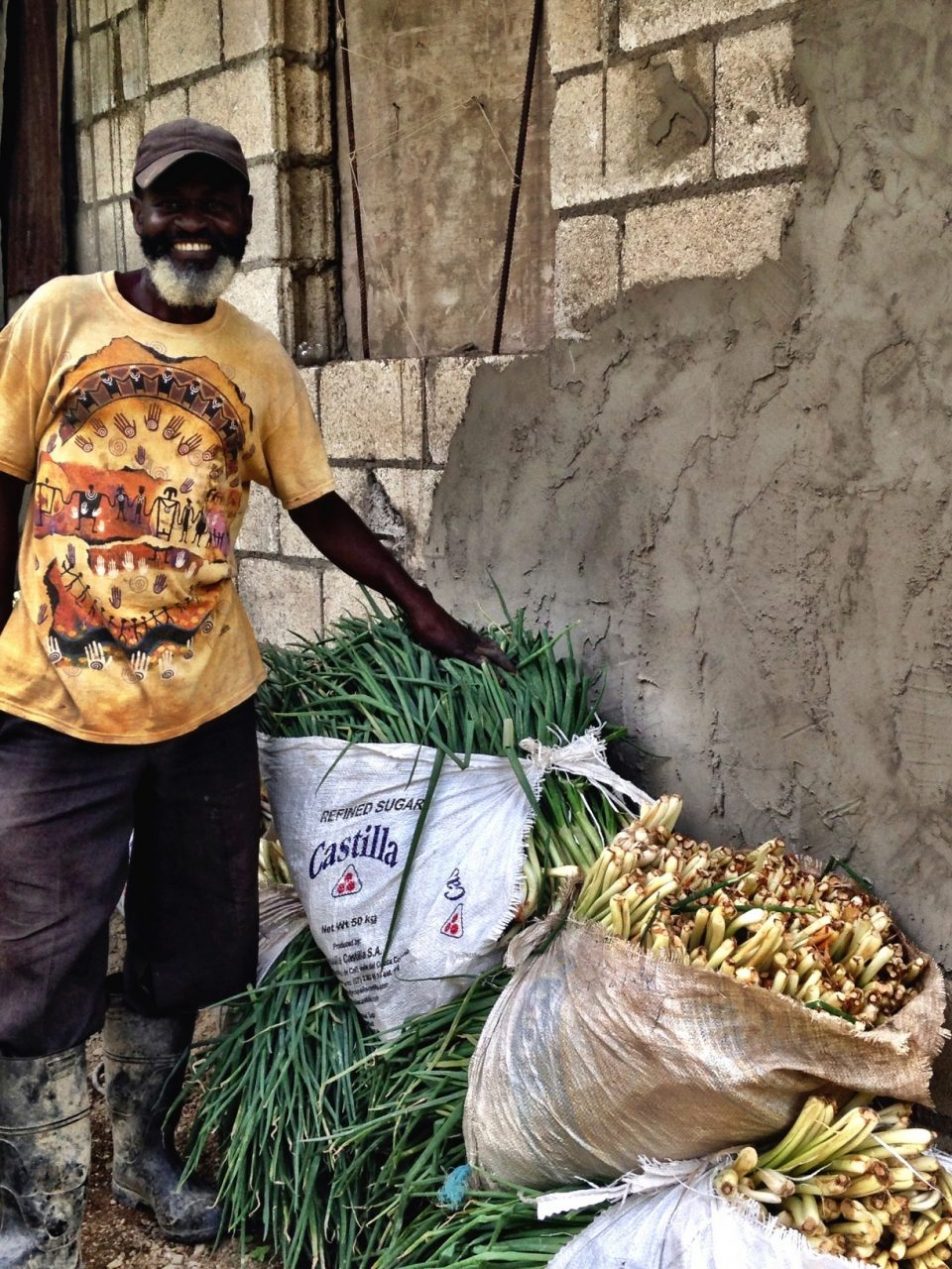 Preserving Jamaica’s gastronomy has many tangible benefits for our health and our planet. Eating food that is largely plant-based and minimally processed is vital for properly satisfying our dietary needs. We are blessed with a wonderful climate in which to grow produce and raise animals. It is important to support the Jamaican agriculture sector, but it is also lighter on the planet to prioritize eating food that doesn’t have to be shipped thousands of miles to get here. Showcasing our local produce in our unique cuisine is also important to the economy in other ways. The world travel organization claims that over half of the people who travel for leisure also travel to experience a country’s gastronomy. In a place like Jamaica which relies heavily on tourism, food tourism is important. There is also an enormous appetite among local foodies for new experiences that use and re-imagine our cuisine, as shown by the recent, runaway successes of operations such as “Stush in the Bush“, which serves creative, vegetarian fare. 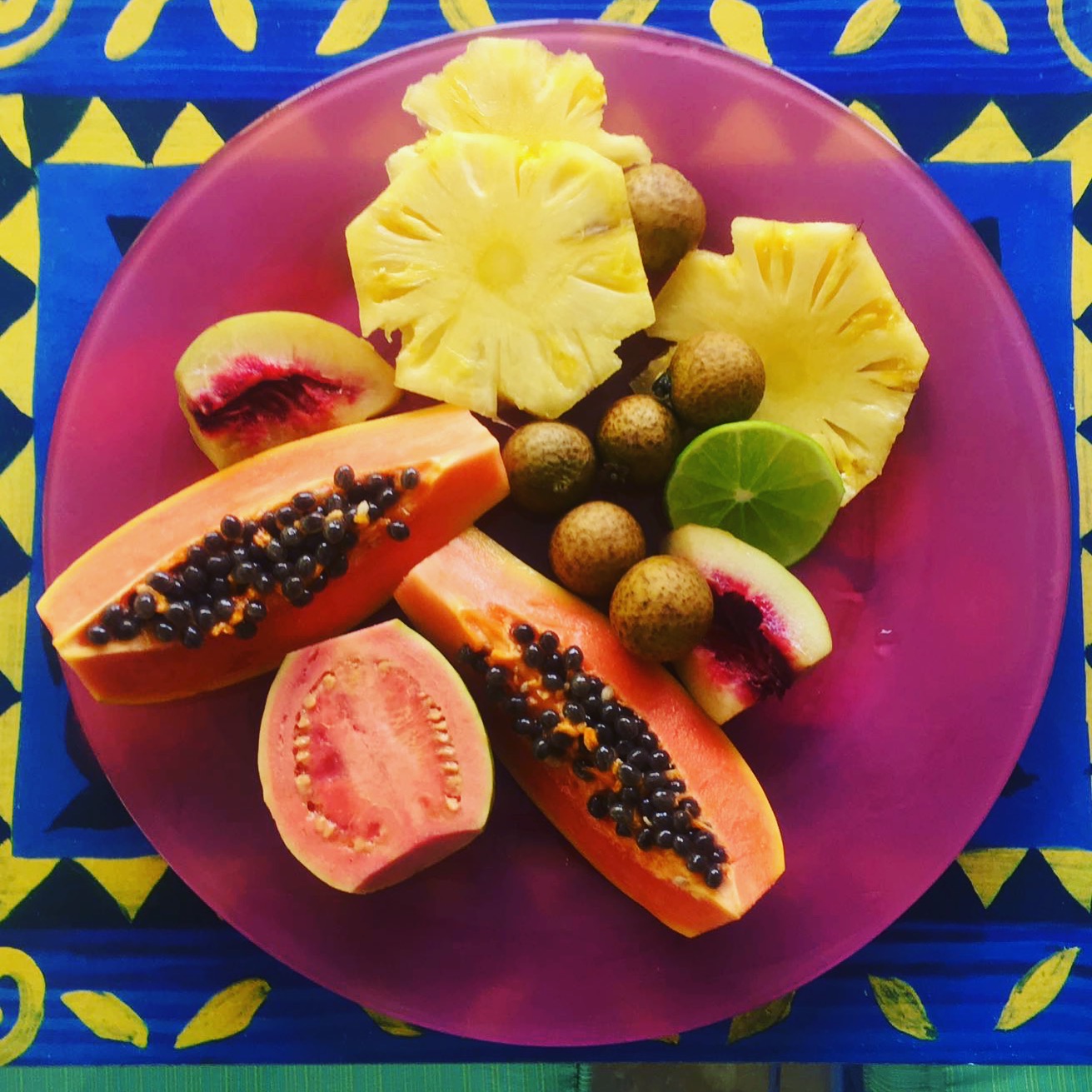 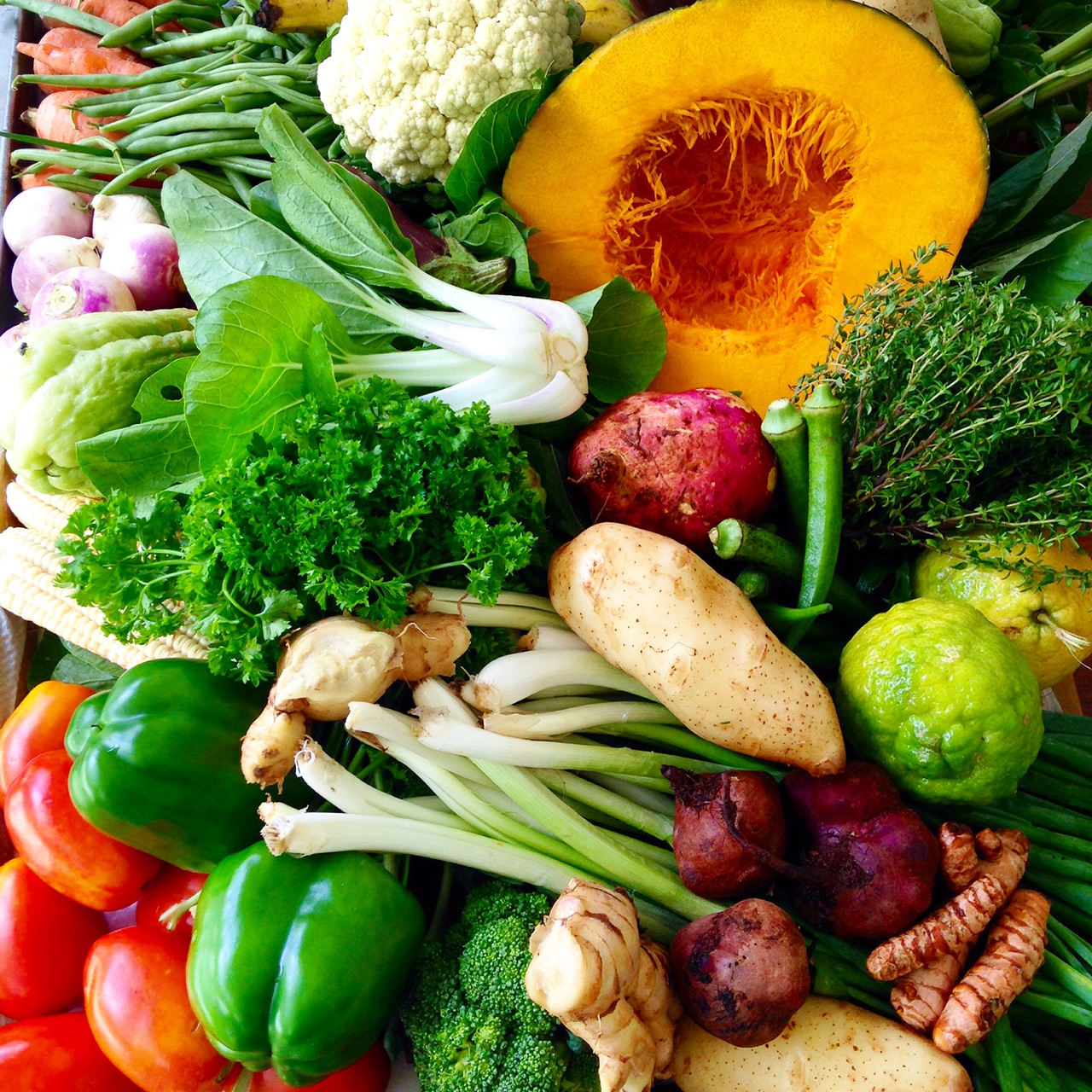 Traditional ways of preparing food minimized food waste, for example, by using every part of an animal slaughtered for consumption. Cow foot, cow skin cooked with broad beans, and corned cow tongue were common Jamaican delicacies a generation ago and are hardly ever eaten now. Similarly, there are many examples of fresh produce (fruits, vegetables, herbs, and spices) that are coming back into vogue or being reexamined. Some of these are the cassava as an alternative flour, green Jackfruit and its seeds, susumbers, the heart of the coconut, and moringa leaves. Breadfruit, a plant brought to the island by Captain Bligh and which bears a bread-tasting fruit, is one of the unsung heroes of our cuisine that is being given more attention recently because of its nutritional properties and the fact that it is gluten-free. More ways of eating breadfruit and making value-added products, such as breadfruit flour, are being developed. “Trees that Feed” is an organization that was started by Jamaican philanthropist Mary McLaughlin to promote growing fruit trees like breadfruit around the world to address critical problems such as food scarcity born of the unfolding climate crisis.

Our dishes, like our people, are “a mix-up mash-up “; a rich cultural stew.  Jamaican gastronomy is as much a mixture of food traditions as is the makeup of our country’s ethnicities.  When I was writing the Belcour Cookbook, I thought about each recipe, where it came from, and how many different cultures were reflected in each dish I loved. My Chinese father used to remark that our beloved hard dough bread was very similar to the mantou bread he ate in his youth, and it is an interesting fact that most bakeries in Jamaica are owned by members of the Jamaican-Chinese community. Patties are a national fast food, and are more than likely a derivative of an English pasty, but with a spicy beef filling and sometimes with curried chicken inside. Another great example of our food being a reflection of our cultural integration is our national dish: ackee, and saltfish. Ackee is a fruit brought to Jamaica from West Africa and salted cod (saltfish, bacalao) has been imported to our shores from Scandinavia for centuries. 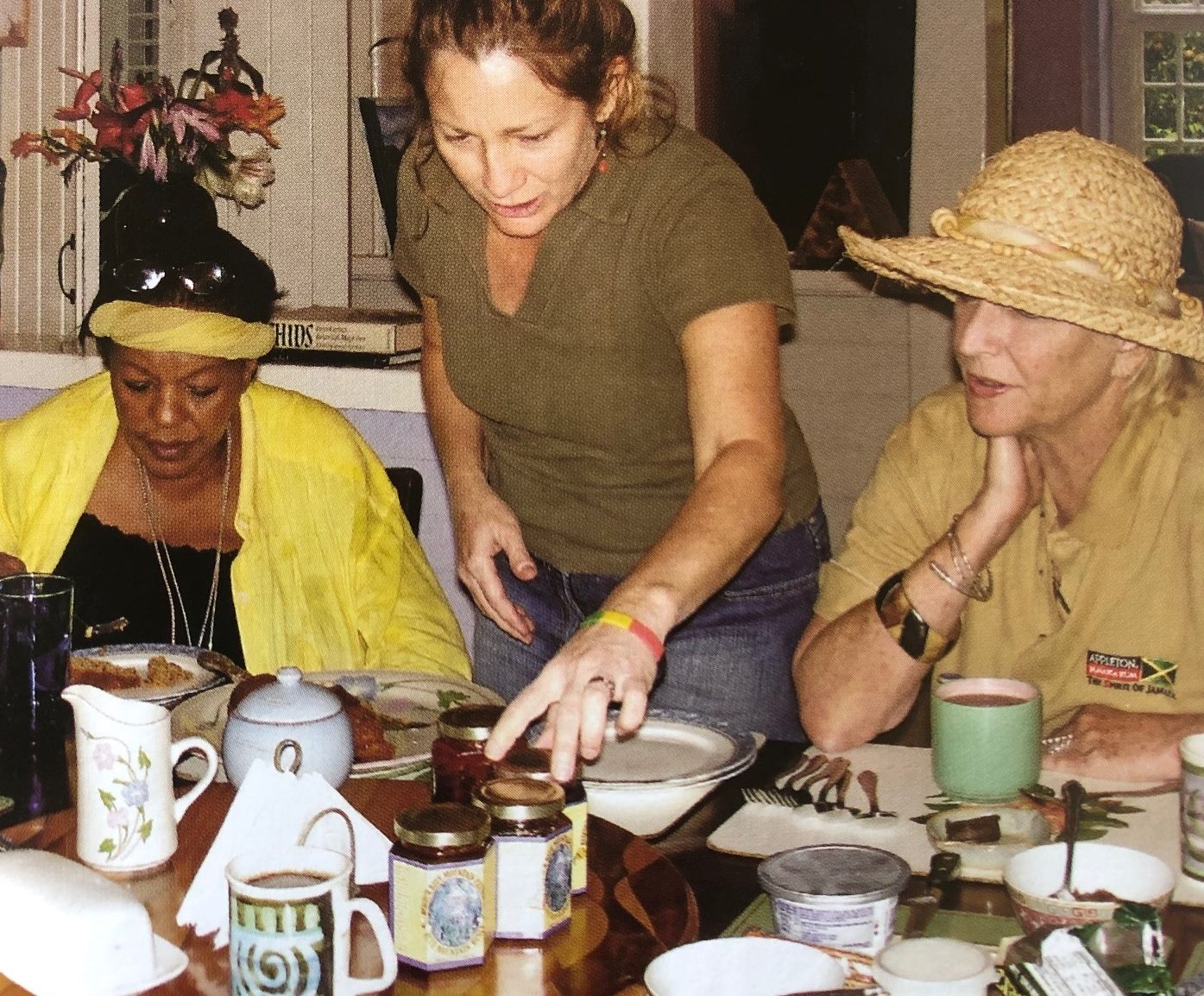 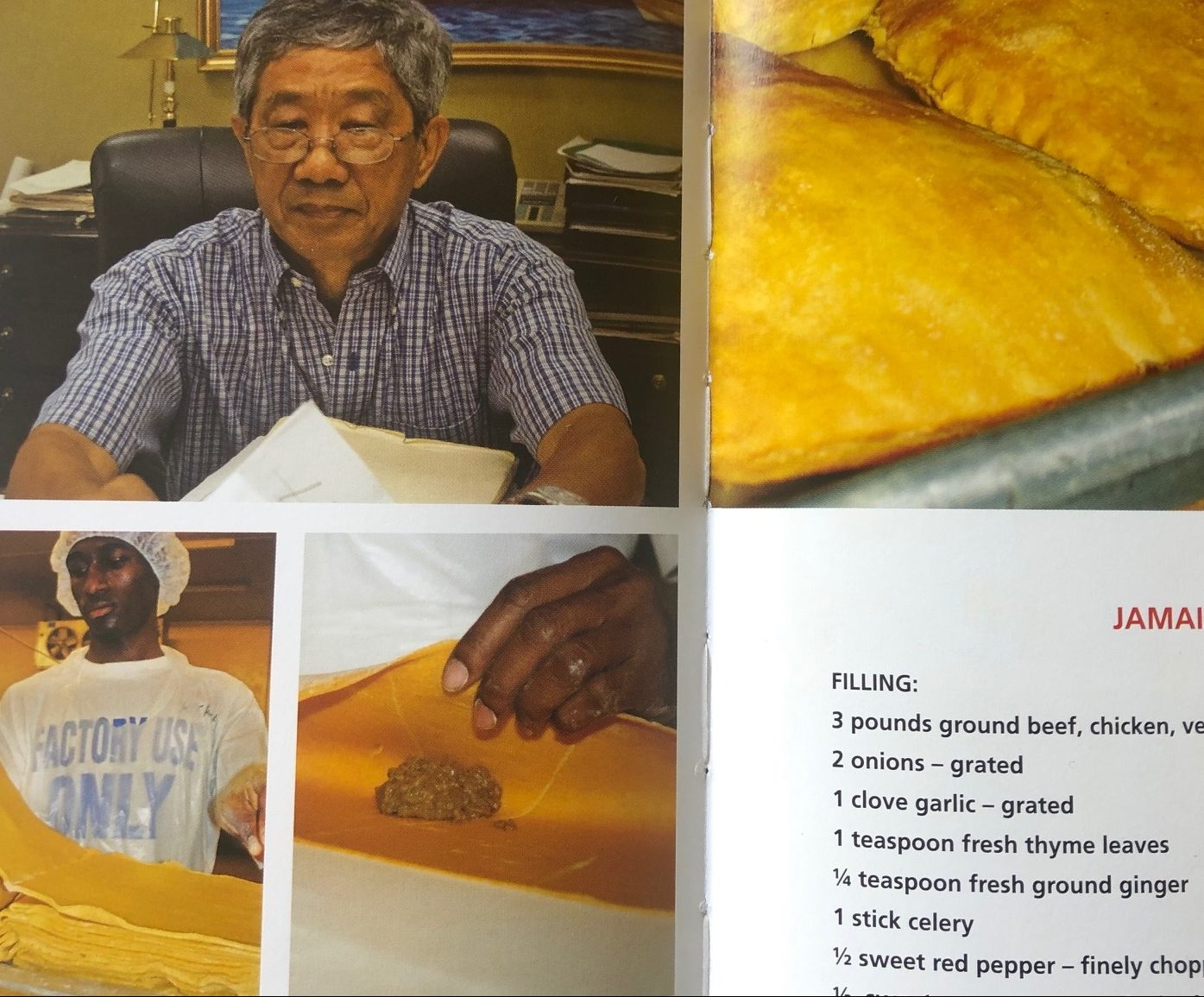 The photographs above are by Cookie Kinkaed were taken from the book Nyam Jamaica the best food travel log chronicling traditional Jamaican food around the island.  I am on the left in the middle discussing our Belcour Products with Norma Shirley food doyen and Nyam Jamaica cookbook author Rosemary Parkinson. On the right is Vincent Chang managing director of Tastee Jamaica Ltd., the largest patty franchise in Jamaica and perhaps the world. 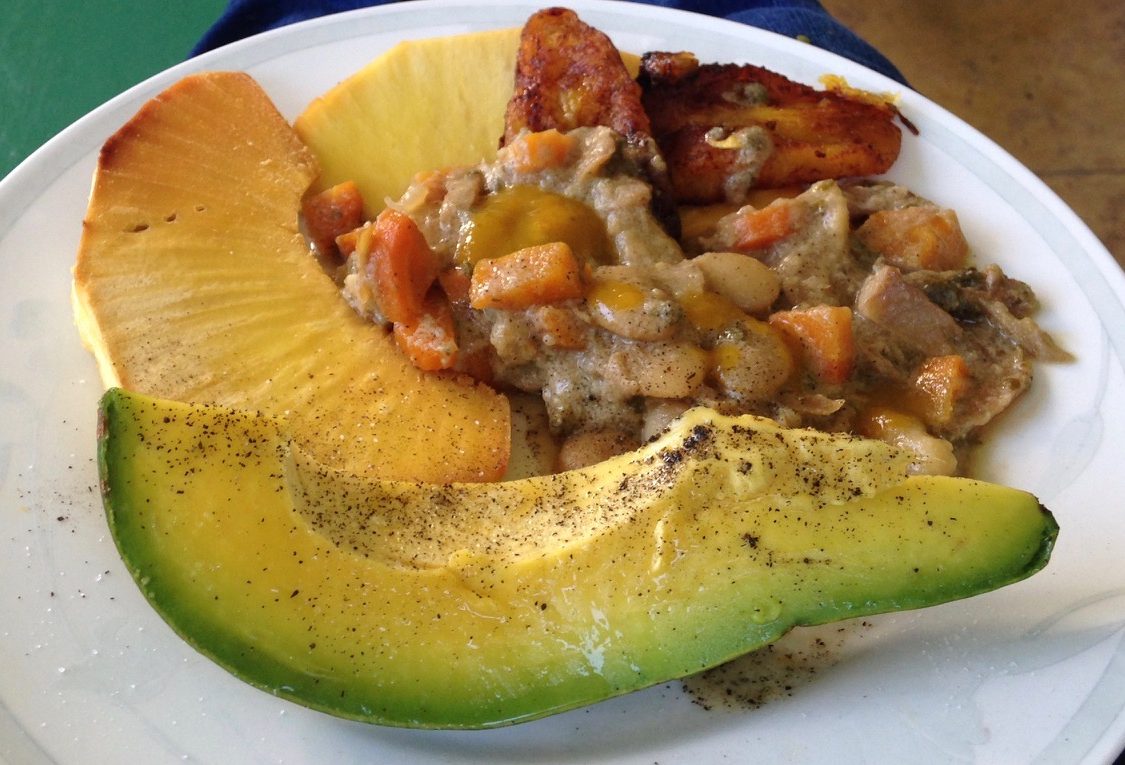 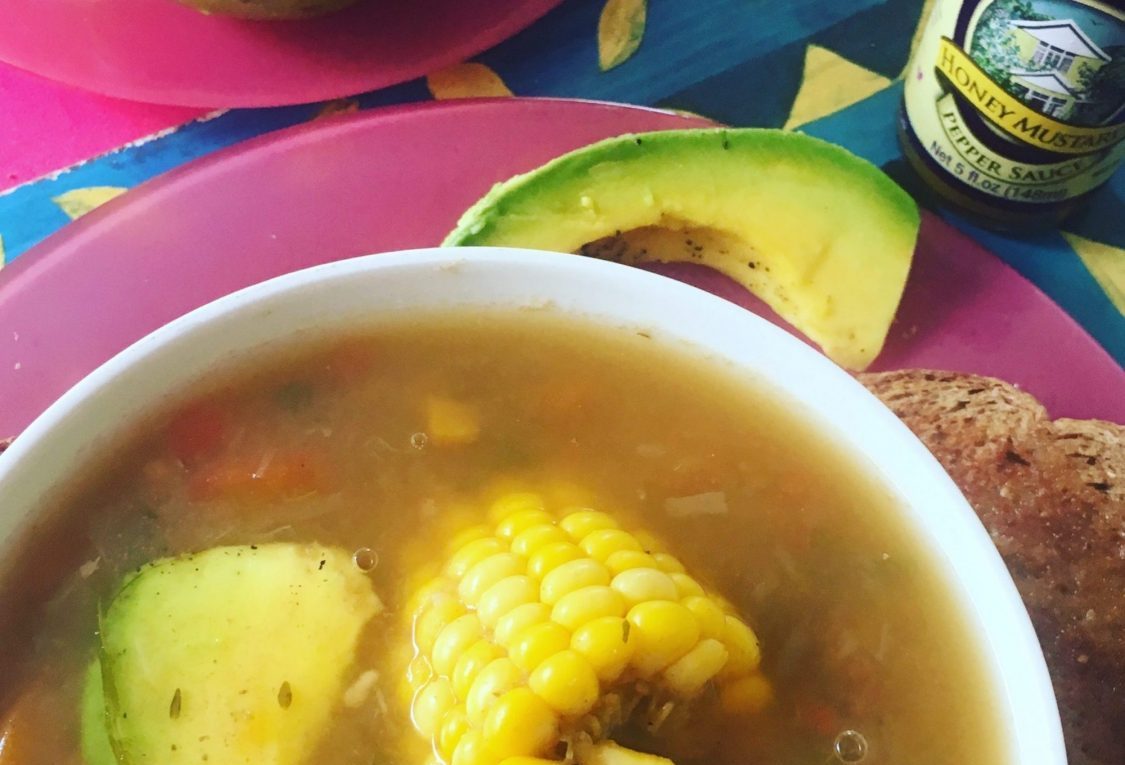 Home cooking. On the left fried Breadfruit, stew peas rundown, and avocado on the right beef and corn soup is mostly made with beef bones and often served with slices of avocado pieces of corn, and slices of buttered hard-dough bread.

As a cook, I  have set out to learn some more esoteric traditional recipes that constitute Jamaica’s gastronomy but are seldom seen today. I was discussing traditional dishes and methods of food preparation with an amazing cook Lin Palmer. She shared with me the recipes for cow foot with beans, a dish our father loved, and how to make ducanou (or Blue Draws) which is a cornmeal pone with raisins, nutmeg and cinnamon. It is similar to a tamale because it is wrapped and steamed in a banana leaf. Everyone has an auntie or grandma who made some of these traditional recipes, my own grandmother made things like corned beef, cow tongue, and tamarind balls. At the same time, it can be difficult to find someone who knows old recipes and even harder to find people who are available to teach you how to make them.

I asked Lin why she had never mentioned how to cook some of these old-time recipes to me and she said she didn’t think I would want to learn them because they were “poor people’s food” and it wasn’t good enough to be thought of as “gourmet”. Food is also a gateway to memory and, unfortunately, our gastronomy is often a reminder of a painful past. While it is important to be sensitive around these topics, I believe all of our dishes are worthy of examination and appreciation. I never forget Norma Shirley saying that one of our traditional and ubiquitous dishes, stew peas run down (red beans cooked in coconut milk and sometimes made with salted pigtails) can be presented as a “gourmet” dish, if the pigtail is removed. Norma was the first generation of Jamaican chefs who recognized that preparing traditional Jamaican fare with a fresh perspective could raise them to the level of haute cuisine when served with her special panache. 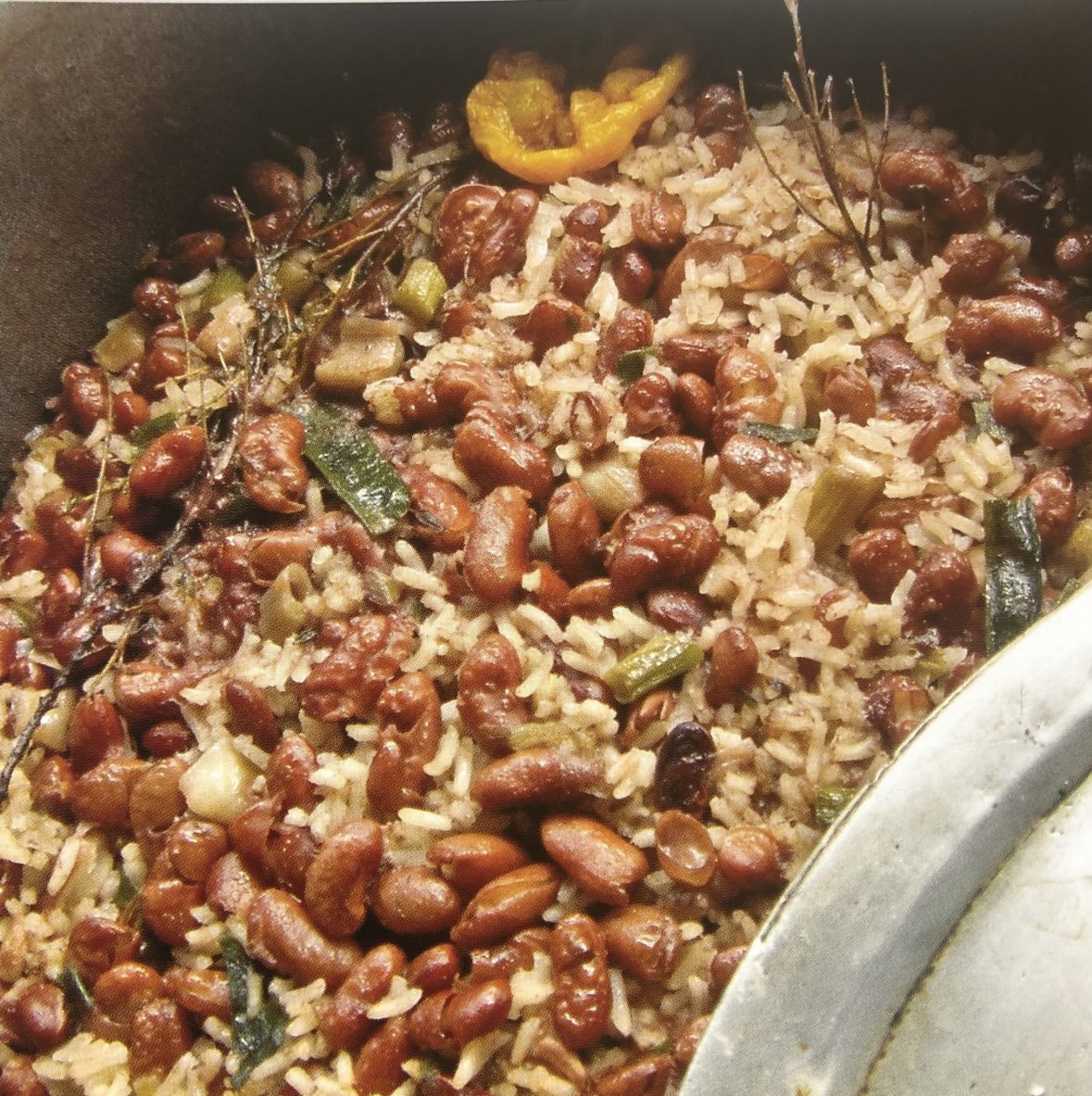 Lin Palmer is pictured on the left. The photograph of rice and peas on the right was taken from Nyam Jamaica.

So here are some common examples of traditional Jamaican gastronomy that, in my opinion, are as good as any dishes considered as being “gourmet fare” anywhere in the world.

Fricassee chicken (a braise) with the rich gravy poured all over rice and peas (rice made with coconut milk and beans) also known as Jamaica’s Coat of Arms and is standard at Jamaican Sunday lunch.

Oxtail with its succulent, fall-off-the-bone meat, broad beans, and gnocchi-like dumplings is a sublime combination.

Corned Pork, roast crispy pork, and of course or famous Jerk Pork all make the grade of gourmet Jamaican gastronomy.  Jerk pork is now a world-famous Jamaican dish and when served right off the fire, with lots and lots of the Scotch Bonnet vinaigrette, hot hard dough bread or roasted sweet potatoes is mouth-wateringly good. It is worth noting that our crispy pork with the crackling is probably a Jamaican adaptation of Chinese Crispy Pork belly.

Jamaican curried goat, lobster, or shrimp was brought by East Indian immigrants. Jamaican curry is a distinct blend of spices some of which are used in Indian curries. 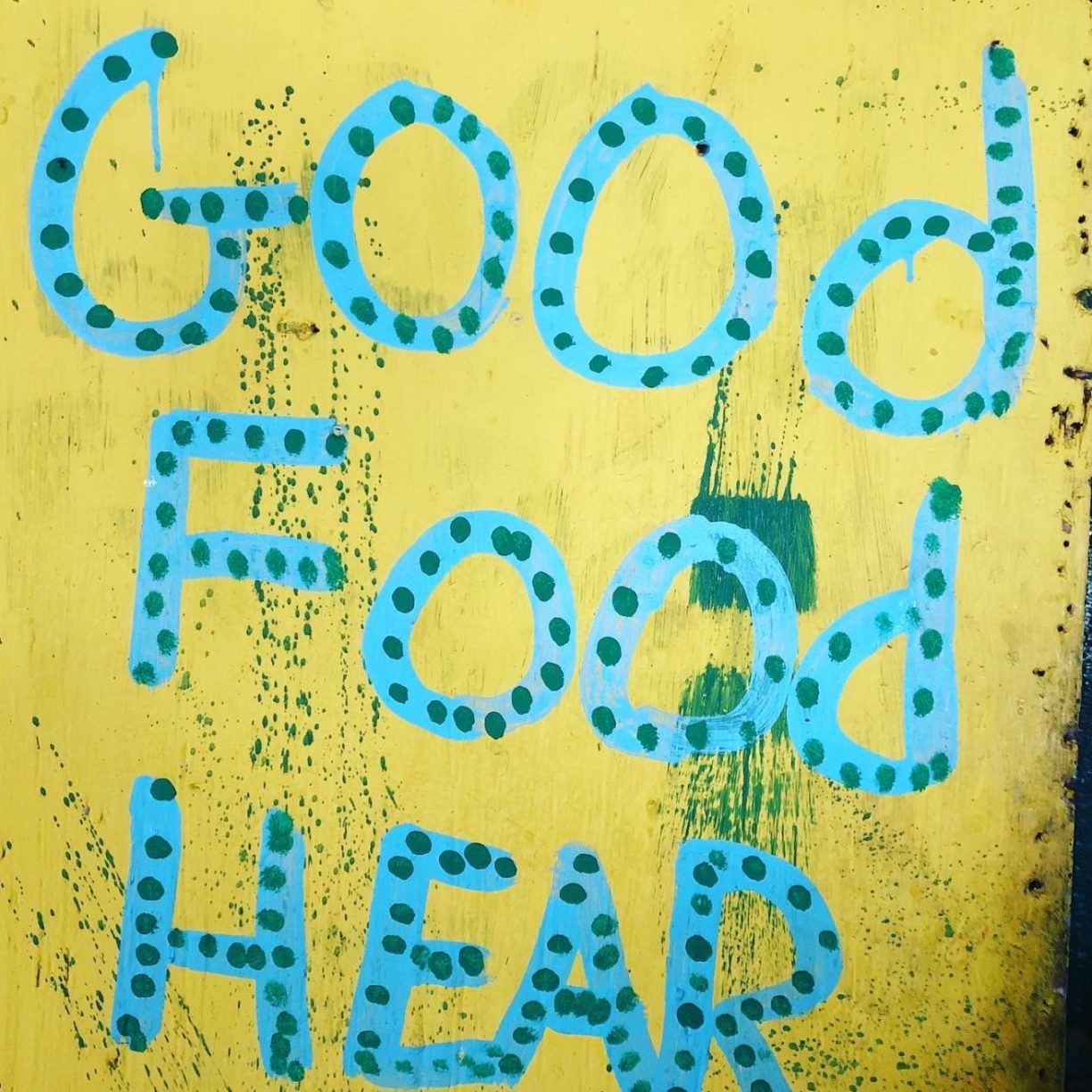 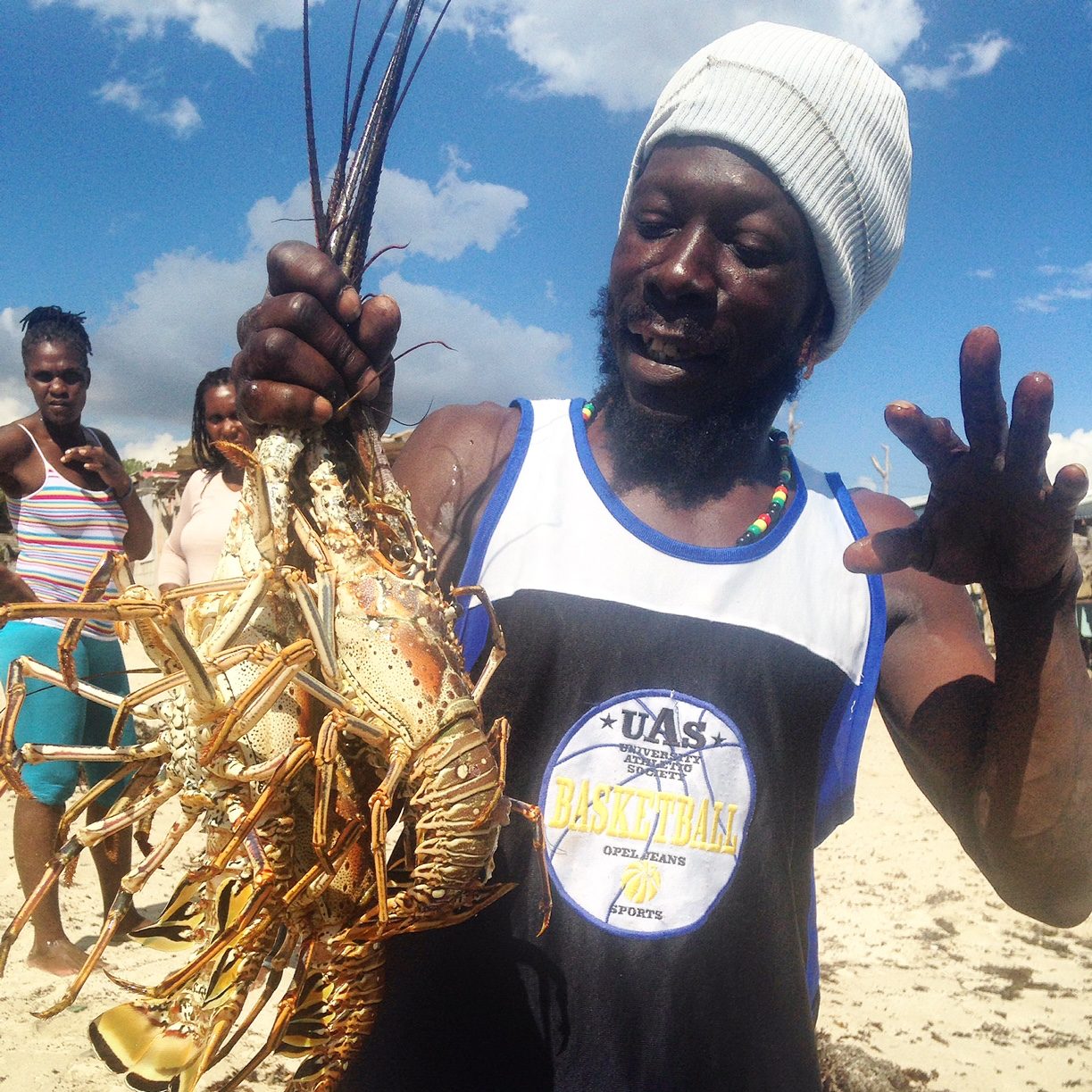 For seafood lovers, oysters are shucked and served with a special Jamaican oyster sauce made with hot peppers, honey, vinegar, and pimentoes, which has to be one of my favorites and is as good as oysters served anywhere in the world.

The more ubiquitous steamed fish is similar to Cantonese steam fish with scallion and soy sauce, but here pieces of pumpkin and okra are added to it and it is served with soft, steamed “bammy” – a traditional bread made from cassava, first cultivated by the indigenous people of Jamaica, that is fried, baked or steamed.

Fried fish and fried lobster served with escovitch sauce made from pickled onions, scotch-bonnet peppers, carrots, and pimento berries in vinegar , originally thought to have come from Spain, could be a candidate for a “Last Supper”. The fish with its crisp skin and white flaky flesh inside, slightly salty and served with bammy or festivals (similar to beignets made from cornmeal) and washed down with a cold Red Stripe is, well, sublime. 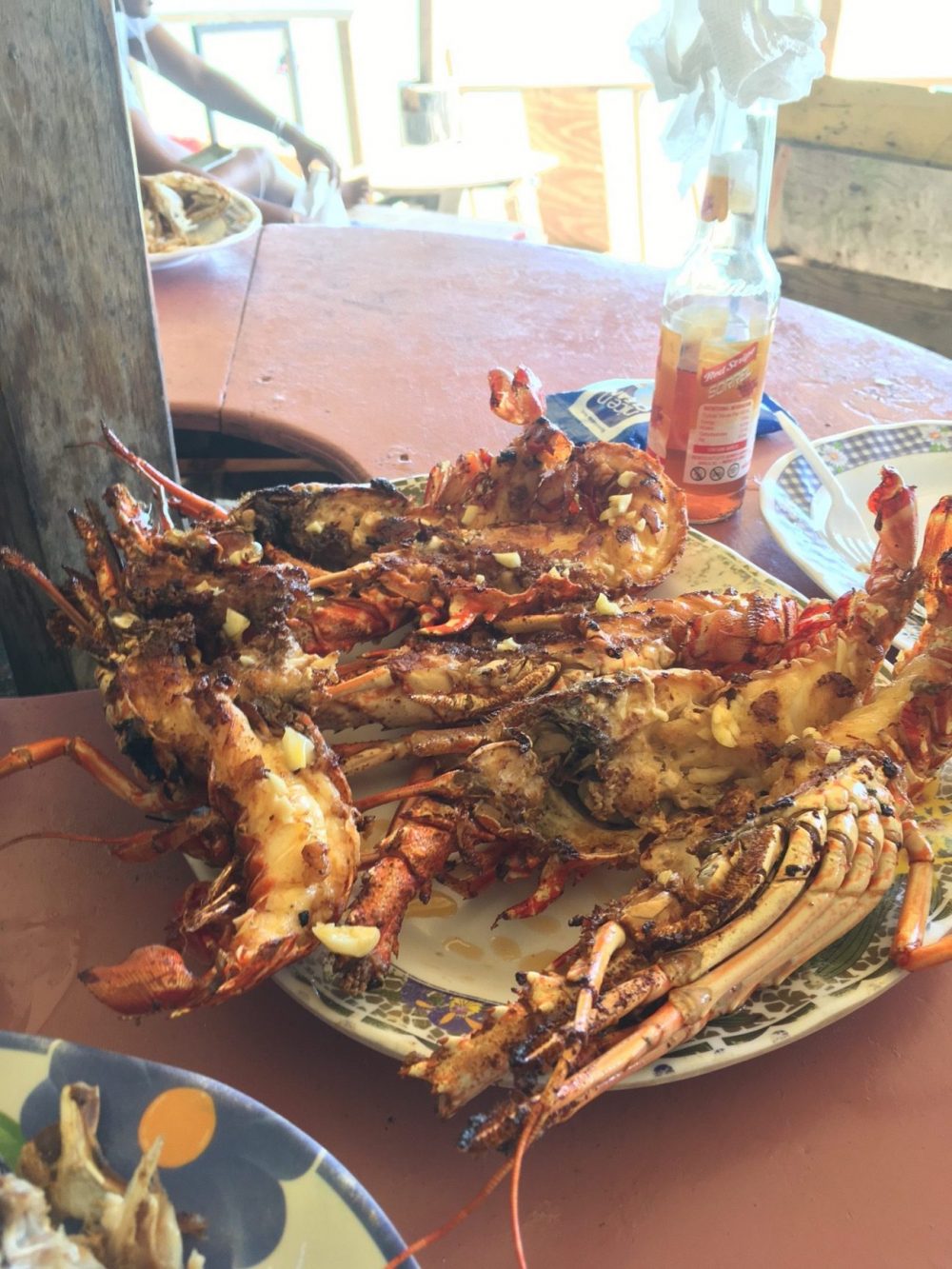 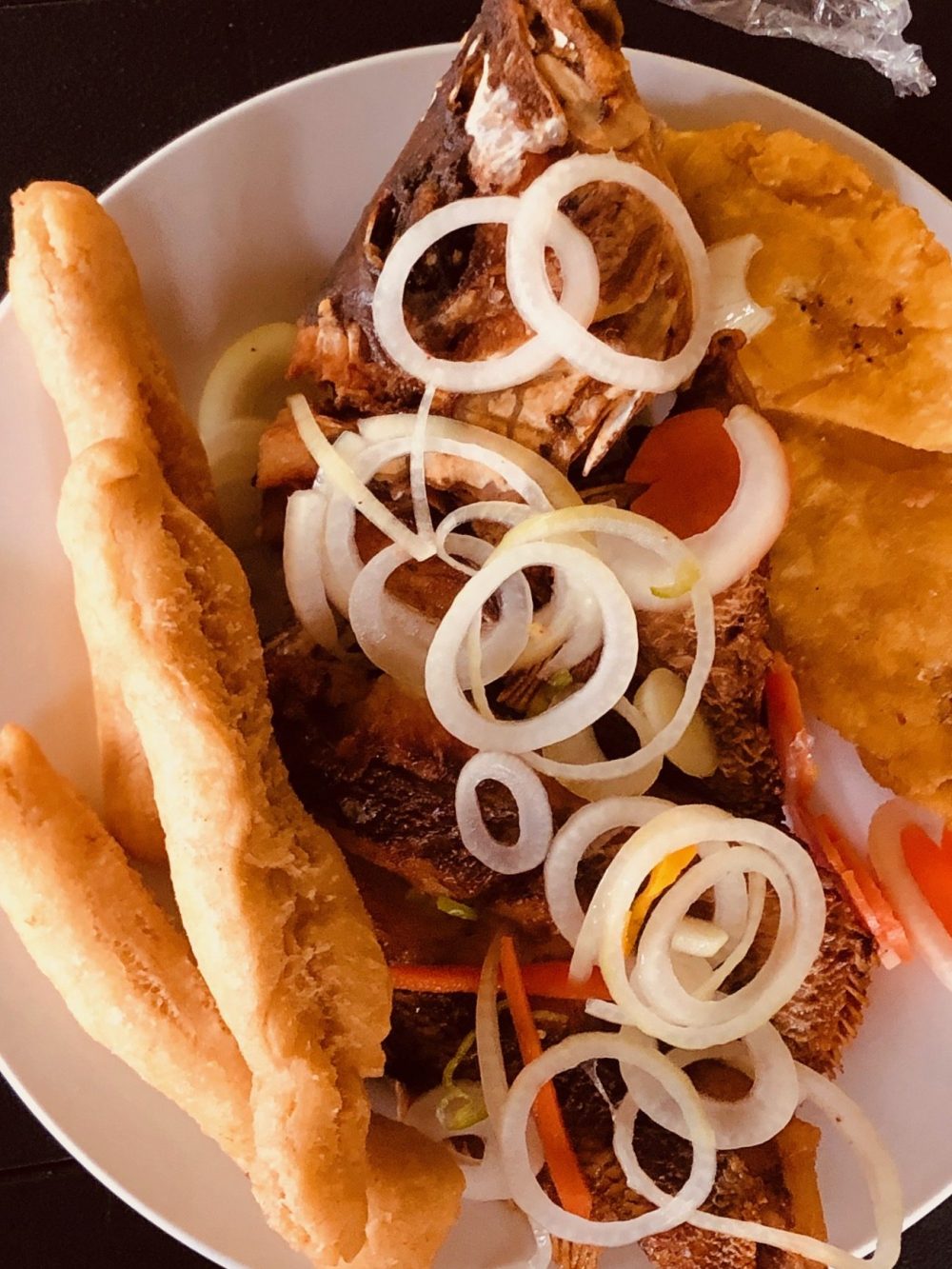