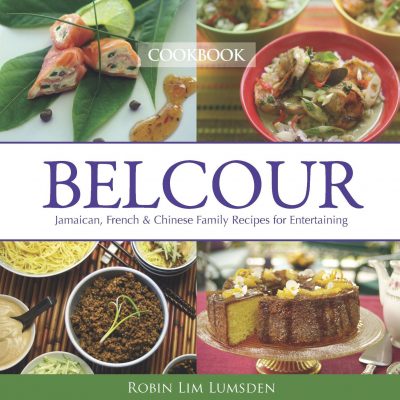 This book celebrates a Jamaican family’s legacy of love, food and hospitality. Jamaica’s heritage is a fusion of diverse cultures, and the recipes in this book reflect the richness of Jamaica’s culinary landscape. Interwoven throughout the book are short vignettes of the family’s history over three generations. The recipes act as both a snapshot of a personal history and a useful manual for entertaining.

Where to get a copy

I had a dream of publishing a cookbook with my Mother’s recipes after she died, so I set out to write a book sharing recipes she had collected over her life. As I put the recipes all together, I realized that I probably should explain how Chinese Red Cooked Pork and Eggs, Ackee and Salt Fish, and Chicken Au gratin ended up in the same book or else the readers may be thoroughly confused. Also many of the recipes in my book, reflect the merging of different cultures and tastes. For example, the Honey Jerk Pate gives you a sample of what can happens when France meets Jamaica. And so this how this book came to be not just a cook book, but book about my family’s history and memories of the beautiful times we spent together, when I was growing up in special family homes. It is through the telling of these stories that these recipes came to life and I believe reflect the melting pot of cultures in Jamaican cuisine. In many ways my book was also quest of my own Identity. I spent many years growing up trying to convince even my own countrymen how this white looking girl with a last name like Lim, came from Jamaica. In the writing of this book, I found out who I really am. As Professor Barry Higman cogently wrote: Jamaican food is at the heart of what it means to be Jamaican. To me food and memory are intertwined; what we eat and why we eat it depends on our heritage. Being a gourmand, I have a Pavlovian reflex to food which immediately triggers memories.

When I was a child we often ate a dish called Ja Ja Mien for dinner, it was one of my father’s favourites and is still one of ours. Dad said it was a poor man’s dish from the North of China. His Chinese God Mother often visited us in Jamaica and she taught Mum how to make it. It consists of Pork in a Black Bean Sauce, served over Spaghetti with slivered cucumbers and peanut butter or sesame sauce. Dad said when Marco Polo visited China, he took back the recipe and that was the genesis of spaghetti and meat sauce. We never saw Ja Ja Mien on any menu in any Chinese restaurants, so we were very skeptical about this being another of Dad’s fantastical tales of growing up in China. When Mirah, Dad and I visited China in 2000, we finally found Ja Ja Mien, and somehow discovering it validated all my father’s fascinating recollections of growing up in pre-war Peking and his life in China. Jah Jah Mien will always remind me of my father and his wonderful heritage. It takes a village to birth a creative project, a few of my talented team are here, my sister Mirah Lim, Fern Proctor Belcour and Robert Harris. I hope my book encourages those of you who have books in the cupboard, music to make, paintings to paint, just to do it, we die, but books don’t. Jamaica needs more stories told by us about Jamaica’s diverse culture, postcolonial history and new narratives about our country.

After publishing and beyond…

Amazingly after I published the book, my journey has continued. A year after I wrote it I was invited by the Chinese Government through the Embassy here to take part in the huge event in Tiananmen Square celebrating the defeat of the Japanese, thank you so much Duan Junglong who is here tonight for organizing our visit. Our Grandfather, Dr Robert Kho Seng Lim, was head of the Red Cross and provided the medical relief for all of China during WW2 against the Japanese. I will treasure the memory of occasion for the rest of my life. Last year I was invited by the world Gourmand cookbook association and sponsored by the JTB to the Frankfurt Book show to present my book and represent Jamaica there. Many people have told me the book sits on their kitchen counter and that’s what I love to hear. I think it is important that families eat together it’s part of the glue that keeps families together, and it’s important that our children remember the happy times spent eating delicious food together. Cooking is very easy and it’s enjoyable and it gives you both control of what you put in your body and a connection with your food, even if it does not come from your garden. The recipes have been proven over time, and teach you some basic techniques, you will be excited by how much people enjoy them. I hope this book gives you confidence to cook for people love and please feel free to experiment.